The final part in the series of a close look at fuses concludes.

Fuse-holders for UK industrial and commercial applications are designed to meet the requirements of BS HD 60269-2/BS 88-2. The fuse holders normally consist of a separate base and a carrier with the base containing the main incoming and outgoing cable terminals and the carrier holding the fuse-link. Cable terminals are shrouded and the base and carrier mouldings are designed to prevent finger contact with live parts as the fuse-link is withdrawn.

Fuse holders are a popular method of using fuse-links in industrial environments.

BS EN 60269-1/BS 88-1 outlines 3 states of the fuse that need to be considered when protecting personnel against potential electric shocks.

The two fuse holder versions mentioned above are IP2X rated in all of the outlined states.

Fuse holders feature a variety of different termination options, the most common ones you will find are: 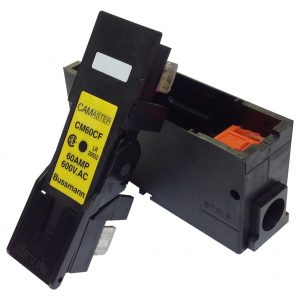 CAMaster is a fully shrouded HRC fuse holder that features a unique cam-action that allows you to both mount the fuse with the correctly applied contact pressure and to unmount it safely.  Other options include Red Spot fuse holders, that feature finger-safe functionality for BS 88 HRC industrial fuses in ratings up to 400 Amps.

When several fuse holders are mounted onto a rear fixing rail and all of their incoming terminals are connected together by a common busbar are known as fuse banks. Similarly, distribution fuse boards are a step above and typically contain, fuse banks, incoming main terminals, earth and neutral bars and side rails and are contained within an enclosure.

BS 1362 fuses are strikingly familiar to most people resident in the UK, these fuses are the domestic type you will find inside a standard British appliance plug and for sale in the local hardware store. Available in a range of Amperage ratings including 1, 2, 3, 5, 7, 10 and 13 Amps. 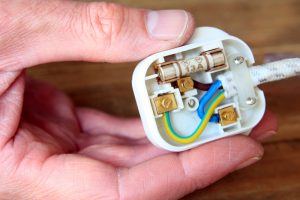 Domestic appliances in the UK use a fused plug which must be fitted with a BS 1362 fuse. The use of the BS 1363 plug and socket system and the required fitting of a BS 1362 plug fuse is a legal requirement under the UK Plug and Socket Safety Regulations of 1995. The cable connected to equipment via a correctly fused BS 1363 plug is always fully protected against the effects of short circuits or overloads as follows:

Ultimately, the protection against damage by a short circuit is achieved even if a smaller cable size is inadvertently protected by a 13A fuse. In the UK, it is accepted that some marginal damage to small flexible cables is tolerable under short circuit conditions.

The use of BS 1362 fuses to protect flexible cords or cables from overload conditions and from faults including; short circuits, earth faults and overcurrents have been essential in the UK for many years. This system is the only one to offer total protection of flexible cables in this particular way.

Kempston Controls is one of the UK’s leading distributors of electrical and electronic components and are a one-stop-shop for all your industrial automation process and control equipment. We stock a comprehensive range of fuses suitable for all industrial, commercial and domestic applications, give us a call on +44 (0) 1933 411411 or alternatively email sales@kempstoncontrols.co.uk to discuss your BS 88, Medium Voltage fuses and BS1362 fuse requirements.