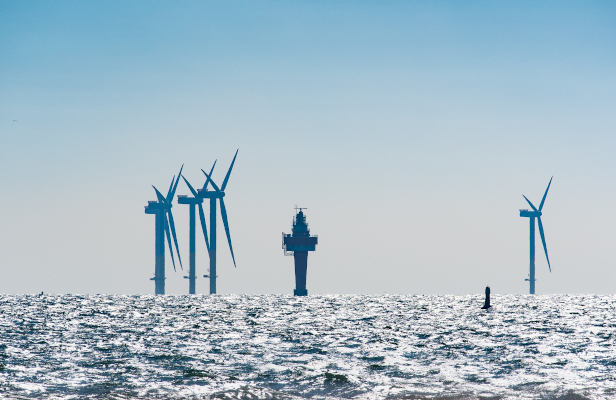 The wind comes in many forms, from a soft gentle breeze to a raging tornado and everything in between, something we can all be familiar with to some extent, but did you know that wind is a form of solar energy?  The wind is created by a combination of a few particular events, in simple terms – the sun heating the atmosphere irregularly, cold air sinking and warm air rising, features of the Earth’s surface and the rotation of the earth itself. The flow of this generated wind and its speed and pattern can vary a great deal, being modified by large open bodies of water, vegetation and differences in natural terrain. 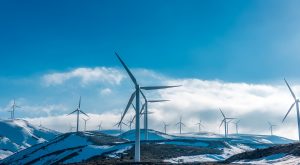 Harnessing the power contained in the wind is a simple theory, one that has been used by mankind for hundreds of years with early incarnations of wind power filling the sails of ships and sending them across the seas to distant lands and turning the blades of a windmill to grind grains. But in the case of wind farms, instead of grinding the wheels of industry and providing propulsion, they provide the means to power modern life with a lower carbon footprint than other methods of power generation such as gas, nuclear and coal. Now, just like that old windmill, the blades of a wind turbine rotate when struck by the wind with even a gentle breeze being enough to cause those blades to turn and start generating electricity.

Turning on the Energy

The energy contained in the wind is turned into electricity by using the aerodynamic force imposed on the rotor blades, which have been cleverly designed to work the same as the wings of an aeroplane. As wind passes across the surface of the wind turbine rotor blades the air pressure on one side decreases, this difference in air pressure creates both lift and drag on the blades and once the force of lift is greater than the drag the blades of the turbine will begin to turn. 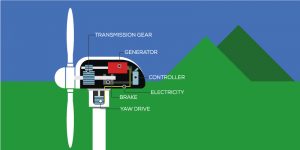 Once the blades of a wind turbine are spinning this begins to turn a shaft contained in the nacelle, which is oblong structure behind the rotor blades, housing and protecting the generator, gearbox and drive train. The generator converts the rotational, or kinetic energy of the drive shaft into electrical energy. Before reaching the National Grid or if the power is being used locally, this wind-generated electrical energy is first passed through a step-up transformer. Wind turbines come in all shapes and sizes and can be found in many different locations, from micro-turbines that can be seen powering small homes, to enormous off-shore wind farms that are visible off the coast of UK, all of these wind turbines use the same principles to generate electricity.

Here is an interactive map showing the locations of all the forms of renewable energy in the UK.

Wind turbines are generally available in two different styles and the one that springs to mind first is the horizontal-axis turbine, featuring 3 blades and a pivoting turbine atop a large tower that can turn to face into the wind. 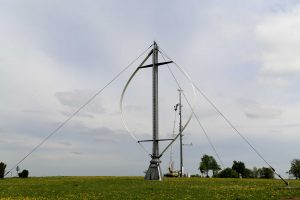 Not seen too often in the UK, are vertical axis turbines, available in a variety of styles including the Darrieus model which resembles a whisk. These particular turbines are omnidirectional which means they don’t rely on their orientation regarding wind direction to begin producing electricity.

Generally speaking, the faster the wind blows the faster the wind turbine rotors turn and generate more electricity, at around 15 metres per second maximum power output is generally achieved. Conversely, if the wind is too strong, somewhere north of 25 metres per second, it may actually damage the wind turbine, in instances like this certain models can shut themselves down to prevent damage.

Ultimately, generating the maximum amount of power consistently depends upon a reliable wind source. The locations of wind farms aren’t just haphazard but are chosen based upon harnessing a consistent and reliable source of wind all year round. You can find them located at the top of a hill with lots of open space surrounding it, such as those found in Scotland and in large offshore farm installations like those visible from the shore in Norfolk. 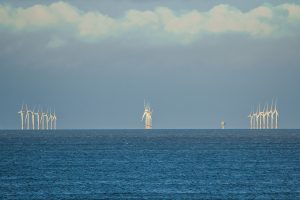 Your average land-based wind turbine has a capacity of around 2-3 megawatts, producing 6 million kilowatt-hours of electricity or more each and every year, which is roughly enough to meet the electrical demands of around 1500 homes. The larger turbines, which can be found in wind farms with rotors spanning 120 metres can produce as much as 7.5 megawatts and are designed to generate power for the National Grid. Rumour has it that 15-megawatt installations are coming in the near future with 20 megawatts wind turbines on the distant horizon.

Your typical wind turbine operates at around 30-45% efficient which rises to 50% efficiency when the wind allows it to perform optimally. Over a one-year period, an onshore wind turbine will typically generate about 24% of its theoretical maximum output, 41% for offshore, which is known as its capacity factor. Meanwhile the capacity factor of more conventional power stations averages between 50%-80%, due to maintenance and breakdown time however, no power plant can realistically generate power for 100% of the time. 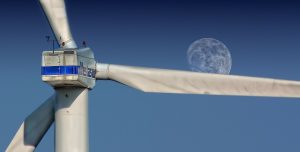 The UK, home of the wind farm

The geographical location of the UK, perched on the North-Western edge of Europe and due to depressions in the Atlantic means certain areas experience a fair deal of windy days over the course of a year, with Scotland being the windiest place in the whole of Europe. With the wind blowing all-year-round wind power is a reliable renewable source of electricity and with the added bonus of it being windier in winter means that wind turbines are producing more electricity when society as a whole is using more energy to heat homes and so forth.  The UK is certainly well placed to benefit from the use of onshore and offshore wind farms and should go some way into helping it meet and even exceed its energy production targets from renewable means. Wind farms are also considered to be fairly low on the carbon footprint scale when it comes to their installation and use, having one of the smallest out of the other renewable sources such as solar and hydroelectric.

In 2018 approximately 15% of electricity generated in the UK was entirely from wind power, back in 2013, just five short years before, the percentage was just a tiny bit above 7%. In the first quarter of 2019, that figure is 18.40% and according to the Department of Business, Energy & Industrial Strategy report, is an  increase in wind turbine energy generation of 9.2% compared to the first quarter of 2018.   At the time of writing, there were 9929 wind turbines in total situated within the UK’s borders, producing 58,319,193 Mwh per year which is enough to power 15, 424, 277 average homes. Things are moving, and moving fast (like the blades on a wind turbine I guess) when it comes to renewable energy production, which in terms of helping to reduce carbon emissions and our dependence on fossil fuels can only be a good thing.