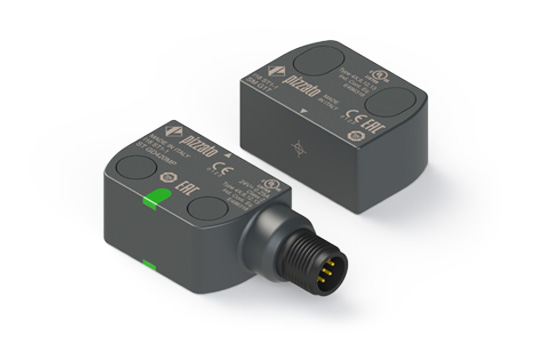 RFID or Radio Frequency Identification uses a digitally encoded tag with information that can be read and captured by a reader using radio waves. A basic RFID system consists of the tag, and an RFID reader. Typically, an RFID tag transmits digital information to an RFID reader within close proximity, which then converts that information into usable data for interpretation and a system response from another piece of equipment. RFID has found multiple uses within industry, including process control and the increasing the safety of machine guarding.

Pizzato are a well-known manufacturer of process control equipment including a broad range of machine access and safety control devices including Safety Hinges, Safety Modules and Limit Switches.

The Pizzato’s ST-G RFID sensors extend all the technology used in their traditional ST-D series sensors, and do that in an even more compact housing.  The RFID technology within provides each actuator with different coding, making it impossible to tamper with a device by using another actuator of the same series. Ultimately, this means millions of different coding options are possible for the actuators, classifying them as high-level coded actuators according to EN ISO 14119.

Versatile, these RFID sensors are suitable for a host of process control applications and the clever housing design allows the same sensor to be used on both left and right-hand safety doors by simply rotating the sensor onto itself. The industry standard 22 mm fixing pattern and compact external dimensions means traditional magnetic sensors can be easily replaced with these more sophisticated RFID Sensors, providing maximum reliability and safety. The robust monolithic housing allows the ST-G RFID Sensors to be used in even the most aggressive industrial environments and the signalling LEDs providing immediate diagnostics of the input and output operating states.

Within this range of industrial sensors is an extended temperature version that is certified by ECOLAB, this ensures that these sensors are ideal for machines used in the food and pharmaceutical industry. Constructed with redundant electronics means that the maximum PL e and SIL 3 safety levels can be obtained via the use of a single device on a guard, avoiding expensive wiring and speeding up installation.

What sets the ST-G series of RFID sensors apart from the competition is an exceptional feature which Pizzato has called Multitag. Multitag is the ability of the sensor to recognise 2 or more actuators in a processing environment. The internal firmware can be factory programmed, memorising up to 16 actuators and associating a different device behaviour to each once the actuator has acknowledged the sensor. This ability allows the user to activate or deactivate the sensor outputs and send information regarding which actuator is in front of the sensor via an O3 signalling output. This signal can be sent to a PLC and processed. 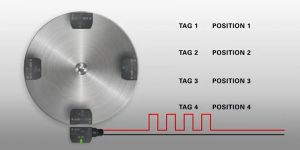 This Multitag function is ideal for machines and industrial processes with several workstations that require various operating modes based upon the recognition between different actuators and the sensor – such as during the change-over of machine parts, robot positioning during manufacturing, industrial process rotary tables control and so on.

For safety gate applications the combination of a sensor and 2 actuators can fully monitor safety guard opening and closing by acknowledging when the guard is fully open and again, fully closed, eliminating the uncertainties caused by incomplete guard positioning and ultimately increasing intrinsic safety.