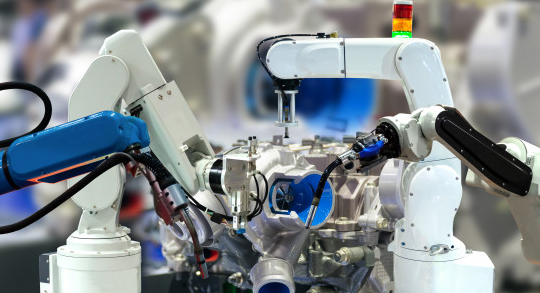 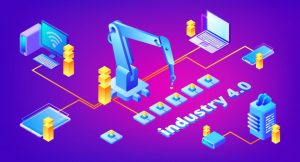 Industry 4.0 is known as the fourth industrial revolution, changing the way we manufacture an ever-increasing spectrum of products all thanks to the digitisation of the mechanism involved in their creation. The change is rapidly growing pace, due in part to increased demand for newer smarter products and with leaps in innovations in the manufacturing industry. The first industrial revolution was the use of water and steam power to drive the great industrial machines, the second step was the modernisation of those older processes through the use of electricity and the advent of production and assembly lines. The third came with the birth of computers and industrial process automation, this fourth revolution, took the computerised automation processes of the third revolution and enhanced it even further with the utilisation of smart data and advanced machine learning.

The computerisation and automation that led to the birth of the third industrial revolution were certainly disruptive, the computerised processes of the day could handle masses of data, perform multiple complicated tasks and so on. As Industry 4.0 unfolds, those computers and control systems are now more advanced and interconnected and can communicate with each other, make decisions based on data and act on them, taking human involvement out of the loop. With the Internet of Things and a rapidly expanding network of internet-enabled smart industrial devices, such as Robots, motor controllers and sensory technology means the smart factory is becoming the norm and the nearly human-free dark factory is destined to become a reality in some industries.

The industry 4.0 revolution is built upon the backbone of these smart devices, and ultimately as they access more and more data and increase in their intelligence, productivity will improve even further and industrial processes will become less wasteful. The definition of wasteful will, in some cases, of course, include a reduction of employees, particularly when it comes to the human-free dark factories mentioned earlier.

This digital network of devices communicating with each other and sending valuable data and information back and forth will ultimately demonstrate the true power of Industry 4.0 in the coming years. And as the devices themselves become even smarter, the opportunity for localised intelligent data-based decisions reduces data traffic and speeds up decision making even further.

Some industries and companies may be reticent regarding how exactly Industry 4.0 could have any significant impact on their business while many others are embracing the march of Industry 4.0, seeing the prospects of increased productivity, lean manufacturing and intelligent maintenance. 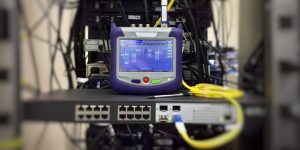 One of the primary additions to Industry 4.0 is the Internet of Things (IoT), a thing in the IoT can be anything, a person with a heart monitor, a farm animal, an electric motor, basically anything that can be assigned an IP address and is network enabled.  These smart devices use embedded processors, sensors and communication hardware to collect, send and act on data they acquire from their environments.

With regards to industrial automation, IoT enabled devices not only assist with providing data about internal processes but through the use of cloud storage, equipment and operations can be optimised by leveraging the insights of others using the same equipment the world over.

Modern factories depend on steadfast machinery, Industry 4.0 takes the concept of dependability, process improvement and cost reduction further, with smart machines that can independently communicate with each other, exchanging valuable data that in-turn can manage the production process itself and be sent for further analysis. Within industries that demand precise processing and data capture, such as the pharmaceutical industry, valuable information that forms part of the compliance of the products can be recorded for interpretation and analysis.

Industrial automation and control processes can be complicated affairs, multiple motors, conveyor belts, robots, press tools, packing machines etc. all of which, should they fail could prove a costly affair when it comes to repair and downtime. Maintaining your fleet of machines used to come in a few forms, planned, predictive, preventive maintenance and so on, but now maintenance can be interpreted differently.

With Industry 4.0 and the IoT, machinery and processes can report on their status, imagine a smart vibration sensor monitoring the bearings of an essential electric motor, once the smart sensor detects anomalies based around established parameters, this could flag a report to maintenance personnel informing them to prepare to change the failing component. The benefits of precision maintenance, when it is actually required instead of waiting for it to fail, or we will change this motor even though it’s perfectly functioning anyway methodology has numerous obvious benefits.

The Continued Rise of the Bots

The growth of robotics within industry is well known to most, rows of advanced robots working on a vehicle production lines performing various mechanical functions, or the pick and place robots assembling components on to a PCB. As a modern example, Amazon utilises robotics in some of their warehouses, bringing products to warehouse operatives instead of the operatives searching for the products themselves amongst the racking

All of these devices can be networked, sending valuable processing data upstream for analysis leading to a streamlining of processes, efficiency improvements, and as mentioned previously, help themselves to stay functional.

With the human population increasing at an exponential rate the need for efficient farming will be required to feed all these people, as a result, the humble farm tractor, as the beating heart of any farm, is destined to be one of the earliest vehicles to become autonomous. Autonomous tractors will be fitted with various vision systems, accurate GPS for precision navigation, IoT connection for monitoring and data feedback, be able to monitor the weather and perhaps access LIDAR mapping for the detection of objects and terrain changes for avoidance purposes. People will still have a place, establishing areas for the tractors to operate in, boundaries and optimal paths to take using planning software and other baseline operating conditions along with maintenance when it’s detected.

It doesn’t stop there either, the accurate planting of seeds, on-time irrigation, crop maintenance and spraying, weeding and harvesting are all currently under development. Deepfield Robotics, a BOSCH start-up business, is busy developing their BoniRob farm-bot that is packed with advanced technology allowing it to navigate to a field, weed it, fertilise it, monitor crop condition and more besides.

Industry 4.0 and its essential counterpart the IoT are rapidly evolving, with billions of devices currently connected and growing rapidly in number, it may take a few short years before we have a clearer picture of its true and full potential. What is certain is that the companies and industries that are adopting and pioneering this technology are rapidly changing our traditionalist view of how things can be manufactured, maintained, farmed, monitored and controlled.  What could previously have taken considerable manpower and time can now be streamlined to perhaps a matter of hours, process times can be optimised and made leaner and can be run without human decision-making input.

One this is certain that this change, whether we like it or not, is upon us, and with the burgeoning population, their demands, and the needs for product and of course more food, there is no doubt that to be more efficient, and carefully utilise all our many resources to their fullest possible potential we need all the help our own innovation can give us.

Considering the rate of change within modern industry and the ever-accelerating nature of innovation and adoption of these advanced methods of managing and controlling a plethora of manufacturing processes, automated vehicles and just about anything else you can think of, what will the fifth industrial revolution be?

Will industry 5.0 herald the rise of A.I? Already outlined as the collaboration between man and machine – could Industry 5.0 (or industry 6.0?) eventually erase humanity from the production process, being solely employed to service and program machinery? All things considered, even that role would appear to be in question with the current ability of machinery to self-diagnose and act on smart data, it isn’t a big leap of the imagination to envisage self-diagnosis and analysis becoming self-repair and self-program. Time will tell as to just what path industry 5.0 (and the iterations destined to follow) will eventually take but what is certain is that that time will be upon us sooner rather than later.