Kempston Controls is pleased to announce a classic British brand will return to UK ownership with our acquisition of MEM (Midland Electrical Manufacturing). The deal, completed on the 1st December 2021 includes Eaton’s MEM MEMSHIELD 1 & 2 and Cranes range. The aim is to continue MEM’s history of innovation by developing, manufacturing, and selling these dependable product ranges for years to come.

Richard Regan, Group Managing Director of Kempston Controls, said: “This is a great acquisition for Kempston Controls & we’re very excited to continue the development of MEM as a leading UK manufacturer.”

Founded in Birmingham 1908 by Walter Barber, MEM initially found success designing and manufacturing switch & fuse gear and in 1927 began to produce products such as the ‘Ironclad’ switch range and fuse gear to meet the demands of a rapidly modernising industry.

Constantly innovating, MEM was one of the first companies to introduce cartridge fuses, and by the early 1960s, their range of products included switches, fuses, motor control gear, electric fires, and convectors. In the early 60s, MEM opened a new factory in Holyhead, Anglesey, and announced their first range of Miniature Circuit Breakers, a product line that they would become famous for.

In 1971, Delta Metal Co. acquired MEM and consolidated several divisions under the MEM brand, during the early noughties the electrical division of Delta, including MEM, was acquired by the Eaton Corporation who continued with the company’s tradition of providing world-leading products.

With the support of Kempston Controls’ technical department and sales teams, MEM will continue to innovate, manufacture, and sell products for many years to come, catering to the needs of an ever-growing industrial and commercial marketplace that demands quality products at the best possible price.

The acquisition of MEM creates Kempston Controls (Manufacturing), a new division in the Midland Automation Group that will focus on the development of new & innovative products. 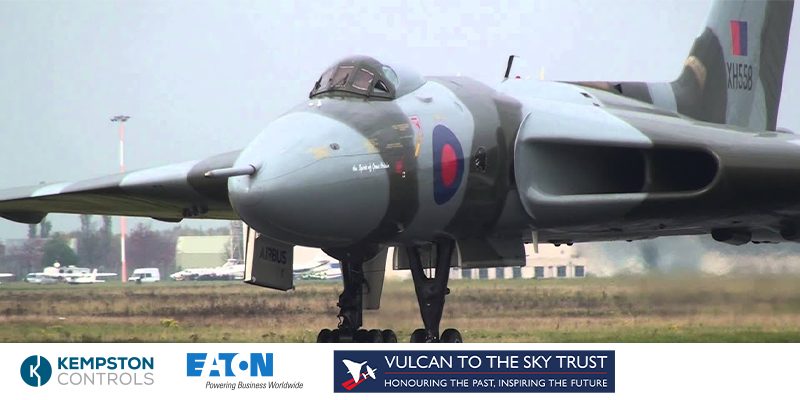 At the start of the year, Kempston Controls partnered with Eaton to provide the Vulcan to the Sky Trust with a donation of rare fuses which are essential to keep Vulcan XH558 airworthy. The Bussmann 059-0125 and 011-9127 fuses are used in the flying control motor circuits and are susceptible to fatigue due to the cycling of the motors driving the hydraulic pumps that drive the flying control surfaces.

About the Vulcan To The Sky Trust

Vulcan To The Sky Trust is a charitable organisation who in 2005 began to restore the retired Vulcan XH558 delta-winged bomber, and in 2007, after more than 14 years of being grounded, completed three successful test flights. In 2008, after another successful test flight, the Civil Aviation Authority granted permission for Vulcan XH558 to perform at the RAF Waddington Air show.

In early 2015 the trust announced that the current 2015 flying season would be it’s last. Although the goal was to keep the Vulcan flying for a few more years, at the start of 2015 the ‘technical authorities’ (BAE Systems, Marshall Aerospace & Defence Group and Rolls-Royce) legally required to support the airworthiness of the Vulcan announced the withdrawal of their support – XH558 was forced to cease flying in October 2015. Although the aircraft was safe to fly, the structure and systems were then more than 10% beyond the flying hours of any other Vulcan and the knowledge base of Vulcan-era technologies within the technical authorities was deemed to have fallen too far to support the aircraft.

Since grounding Vulcan XH558 the Trust has established an education programme which works closely with schools, colleges and other organisations. While still being kept airworthy and capable of accelerating dramatically along the runway, the Vulcan XH558 is being used to inspire and educate new generations of young people.

About the Avro Vulcan XH558

Vulcan XH558 is a jet-powered delta-winged strategic nuclear bomber operated, when in service, by the Royal Air Force during the Cold War. An iconic example of British engineering with XH558 being the last Vulcan in service until 1984 when it was retired. With an impressive list of technical achievements including being the first successful large delta wing aircraft, leading directly to Concorde and the Space Shuttle, XH588 could deliver performance and agility so close to a jet fighter’s that it was given a fighter-style control column.

The XH558 first flew in 1960, and was one of the few Vulcan models converted for a maritime reconnaissance role in 1973, and then as an air-to-air refuelling tanker in 1982. In 1984, once withdrawn, it continued with the RAF’s Vulcan Display Flight, performing until 1992.

In 1993 it was sold to C Walton Ltd who used it for ground-based displays at their Bruntingthorpe Aerodrome in Leicestershire until 1999. Through a combination of public donations and lottery funding, it was restored to fully functional condition by the Vulcan To The Sky Trust, who returned it to flight on 18 October 2007.

To learn more about Avro Vulcan XH558 & their current project, Operation Safeguard to build a hanger and exhibition hall, head to their website: vulcantothesky.org.

Intelligent wiring solutions can streamline connection and communication inside and outside control panels. They help machine and system builders to design their applications quicker and more compact with lower costs.

Have you seen the following articles?